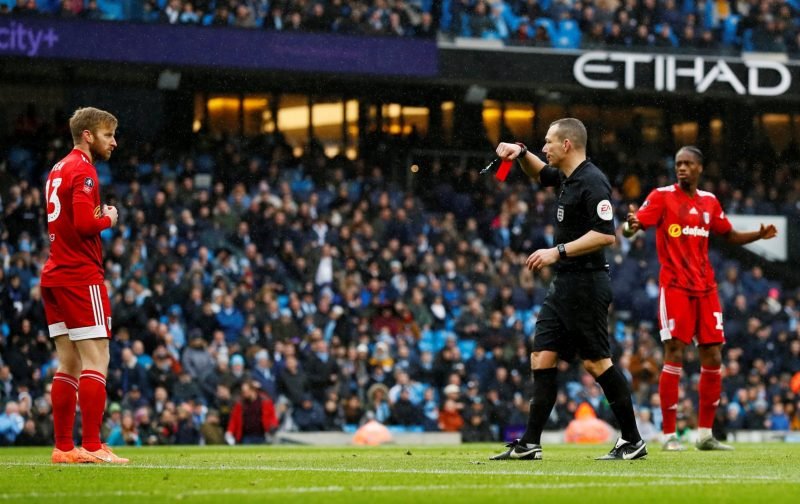 It was there for all to see in the opening minute that the Fulham captain for the day Tim Ream looked on edge.

His very first touch almost gave Manchester City a very early lead. Four minutes later he was left totally out of place in the defensive line, and instead of putting some trust in his keeper Rodak to keep Jesus from opening the scoring, he lost his head and dragged his opponent to the deck. What could he have been thinking? Was this really the same Tim Ream that Fulham fans have known for many years for having such a cool persona?

If he had allowed Jesus to shoot, maybe he may have missed. Maybe Rodak would have made a great save, or at worst we would have gone a goal behind. So what? That was inevitable anyway. No, Ream does the unthinkable, gets a straight red card, City score the penalty and he leaves his team-mates a man short for virtually the whole match.

After the match, the Fulham boss Scott Parker quickly blamed the incident for ruining his gameplay. Absolute rubbish. Fulham played exactly the same way they would have played had they not lost a man. Back to this constant playing out from the back, against one of the best teams in the world. He may get away with it (sometimes) in the Championship, but the players we have, cannot compete in this fashion against world-class opponents.

With ten men, we needed Cavaleiro up front as a target man. The ball needed to be played quickly and needed a higher line defensively. Maybe Parker is trying to display his qualities as a manager that believes he will be managing a top side soon. You can only play to the strengths of the players you have available.

All four goals conceded were from player errors. Too many short intricate passes. Manchester City were not really on their game this afternoon. That turned out lucky for Fulham, as the result could have been far worse.

My congratulations today must go to Shrewsbury Town. They earned the right to a 4th round home tie against the mighty Liverpool. It must have come as somewhat as a let down though for their supporters when they saw the team Klopp decided to field from the start. Most of the big names left out.

It came back to hit Klopp in the face as Liverpool luckily held out for a 2-2 draw, forcing the match into a replay. Exactly what the Reds boss didn’t want. I say it served him right. Well done to the Town!