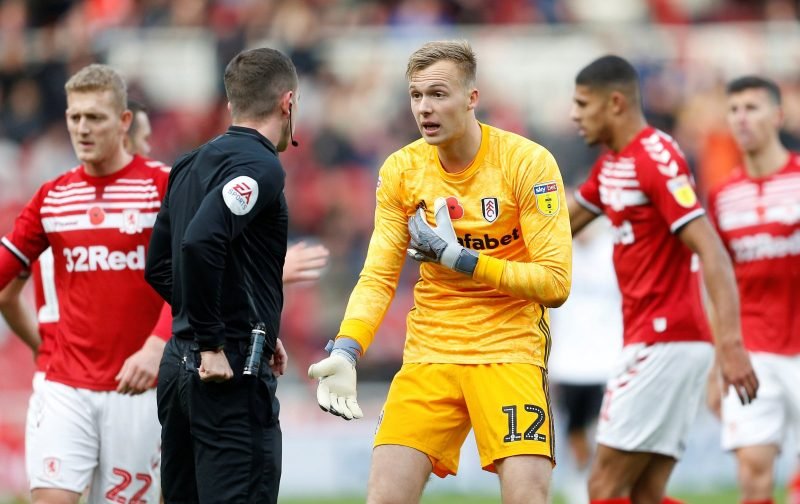 Goalkeeper Rodak was shown the red card for a handball outside his box after just 17 minutes. The Cottagers were forced to haul off the unlucky Onomah for goalie Bettinelli.

For the first time this season Fulham surrendered the better share of possession 56% to 44%, and with a man short, still managed to keep Boro out and finish the match with just their fourth clean sheet of the season.

There must be a message somewhere in this result for Parker to learn from.

We can (with enough hard work and defensive back-up) pick up vital points without always having to have the lion’s share of the ball.

I am fully aware that Middlesbrough have not been finding it easy so far this season in racking up their goal tally, but to keep any Championship team from scoring at home playing almost the entire match with a man short, must give us all some heart. In fact, if Mitro had not missed a sitter by heading wide from close range, we may have even come home with all three points.

Parker must be prepared to sometimes allow the opposition a bit more of the ball by defending when necessary in numbers. We have the players that can attack at speed, but the ball must be moved much quicker forwards, not sideways and backwards. We are so often caught out by opposition on the break, which is where most of our goals against have come. Most top managers build their teams starting from the back. A strong defence and goalkeeper is the first stage. If you keep a clean sheet that is at least one point per match.

We have brought in some good players this season, which is why we were bookies favourites with Leeds for automatic promotion. This is still possible, as the leaders seem to be changing week after week. There are no clear runaway teams like Wolves two seasons ago. Every team are able to beat any other team at present. With the right tactics, Fulham could be the team
that make a break away from the rest in the second half of the season if Parker gets his tactics right, by ensuring there is always cover defensively, and we move the ball much quicker in an offensive manner.

If the inclusion of central defender Michael Hector helps stabilise our defence come the New Year, and we can build from where we are now, there is no reason why we should not be able to secure an automatic promotion place come next May.

What do you think Fulham need to do to achieve promotion this season?